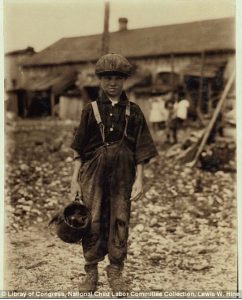 The room.
The room I sleep in.
The room that was supposed to be mine.
The room that was supposed to be mine before everyone else came.
The room that I now have to share with 2 little boys, and their grandma, well, at least their family has a place to sleep now. At least they have a place to call home, even if it is with another family, even if it is small and cramped, even if there is only one bathroom, one bathroom that everyone on the third floor of the apartment building has to share, even if you get paid barely enough money to pay your rent back to the same guy who is your employer, even if it means that you feel embarrassed when your teacher comes over to your home asking why you have not attended school for the past week, even if it means that your mother and sister have to go to work at the mill since your father died, even though… even though things have gone downhill. Mama says we should march, fight, and sing. For what is right, and all that is rightfully ours. Fight, not by violence, but by voice. Fight. Fight to get a better home. Fight to earn a proper wage, fight to be fair, fight for better working conditions.

Fight for my room.